Sun Valley Homes community leader Lisa Saenz said the $240 million redevelopment plan “will be like watering a flower and watching it bloom.”

Sun Valley sits minutes from downtown but is cut off from much of Denver and its opportunities by highways, train tracks, the South Platte River and dead-end streets.

Denver Housing Authority and its partners are planning $240 million in investments over the next five years that will drastically change the neighborhood and provide openings for additional private investment. U.S. Housing and Urban Development and the Denver Housing Authority on Monday announced a $30 million Choice Neighborhoods grant that is part of the overall funding package.

Total public and private investment over the next 10 years is expected to be in the $500 million to $600 million range, city and housing authority officials said.

This plan and the accompanying grant aren’t just about housing.

“Housing is core and essential to what Denver Housing Authority does, and part of the work we start here today is the transformation of our Sun Valley public housing community,” said Ismael Guerrero, DHA executive director. “But more important is creating a vibrant, diverse, mixed-income community. It’s not just about housing. It’s about the neighborhood and the people who live here.”

Sun Valley lies west of I-25 and the Platte, east of Federal, but no streets in the neighborhood cross all three. More than 80 percent of the neighborhood’s residents live in poverty, the highest rate in the city, and 85 percent of households consist of single women and their children. Children under 15 make up more than half the residents, the highest concentration of children in the city.

Built in 1950, the Sun Valley Homes aren’t in great shape anymore, either.

The “transformation plan” for Sun Valley includes the creation of an EcoDistrict that will generate renewable energy within the neighborhood and improve water and stormwater management, micro-business opportunities, loans for manufacturing businesses to bring more jobs to nearby industrial areas, a “youth hub” to provide “cradle to career” services for children, an International Food Market to address food scarcity and meet the needs of immigrant families, a 10-acre riverfront park … the list goes on.

Guerrero said Sun Valley will be one of the most “resilient and sustainable” neighborhoods in the country when the plan is complete.

But it’s also about a lot of new housing.

Roughly 20 percent of the new units will be market-rate, and 80 percent will be affordable to people earning 60 percent of area median income or less, whether as the aforementioned public housing or deed-restricted, privately managed affordable housing.

The first phase will involve building apartment buildings up to eight stories tall on what is now a parking lot at 13th Avenue and Decatur Street. Taller buildings close to the light rail were recommended in the 2013 Decatur-Federal Station Area Plan, which was followed up by a rezoning to CMX-8, an urban center, mixed-use zone.

Next will come new housing at 10th Avenue and Decatur, then the realignment of 13th Avenue, which will be connected to Federal Boulevard to the west.

Then the main portion of Sun Valley Homes will be replaced. Tobin said the plans are not particularly detailed yet for what that housing will look like, but it will probably be three stories.

All of this moving around of housing will open up land that can be sold to private developers, a practice DHA has used at three other sites in the last two years. The transformation plan calls for 1,900 homes and apartments to eventually be built in Sun Valley.

Some parts of the plan still need to bake a bit.

The plan describes a $351 million redevelopment of the Metropolitan Football Stadium District into an “entertainment district” that will bring jobs and services to the neighborhood. In a prepared statement sent out via email, the Denver Broncos said any discussions were “very preliminary.”

“Our organization fully supports the enhancement of the area around the stadium, including the Sun Valley neighborhood,” the team management said. “While we’ve had discussions with the Metropolitan Football Stadium District and the city about the future development surrounding the stadium, those conversations have been very preliminary and have not included any cost estimates.

“We will continue to explore this possibility with the Metropolitan Football Stadium District and the city.”

The plan also describes Xcel Energy committing to decommissioning underutilized facilities, which would free up as many as 10 acres of blighted land for redevelopment.

Xcel Energy spokesman Mark Stutz said the Zuni Generating Station no longer produces electricity but continues to produce steam heat for the downtown area and will do so for several more years. A final decision about decommissioning the site hasn’t been made yet.

Part of the EcoDistrict idea includes a commitment to urban agriculture, and Sun Valley is home to large gardens managed by Denver Urban Gardens and to EarthLinks, a non-profit that uses gardening and food- and plant-related crafts to help people make the transition out of homelessness. EarthLinks bought a site in Sun Valley in 2014 after having to move from Five Points.

However, at a rezoning hearing about an adjacent property earlier this year, administrators and clients of EarthLinks said they feared that taller buildings would block the sun from the gardens and put an end to their work.

Judy Elliott, a senior education specialist with Denver Urban Gardens, said the need for sun will be worked out. Agriculture won’t necessarily happen in the same places as it does now, but food could be grown on rooftops and in courtyards.

Councilman Paul Lopez is very quick to say this is not gentrification.

That’s because people will be staying in the community, he said.

That’s broadly true, though it won’t necessarily be the case for every family. Tobin said the housing authority is aiming for 40 percent retention, which is what happened when Mariposa was redeveloped.

Taking a moment at a City Council meeting later Monday, Lopez said the redevelopment of Sun Valley will take away the stigma of public housing.

“Nobody will be able to drive around Denver and say, ‘oh, those are the projects,’” he said.

Lisa Saenz is eager to see the changes that she’s been working on for years. She moved to Sun Valley in 2010 as a single mother and domestic violence survivor and quickly became a community leader. She’s now the president of the local resident council and flew to Washington, D.C., earlier this year to advocate for the HUD grant. 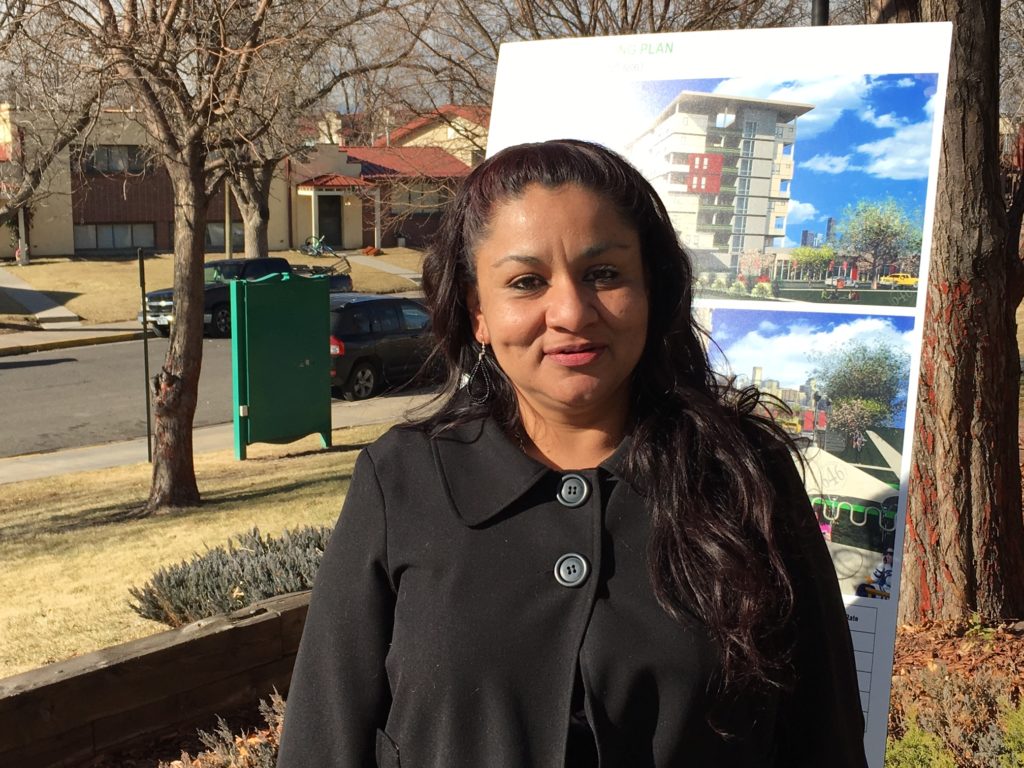 Saenz recalled her son inviting a classmate to come over to play, and the other child’s mother not allowing him to go because they lived in Sun Valley.

“Nobody is going to look at us in a negative way,” she said. “It’s going to be like watering a flower and watching it bloom.”